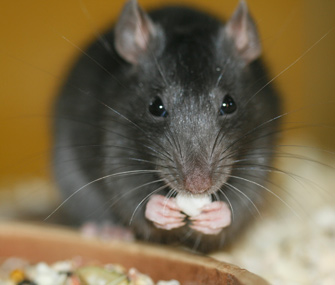 Which species of exotic pets tend to pack on the pounds? This week, we’re looking at the top five species I treat for obesity.

No. 4 on my list of obesity-prone pets are rats!

Rats are known for their ability to squeeze through small spaces and get into everything. It’s amazing the narrow cracks and crevices that lithe little rats manage to get through. Yet, many pet rats sadly can’t accomplish this trick, because they are overweight.

It’s no surprise that rats eat everything that’s not nailed down. Bread, crackers, chips, meat, vegetables and sweets — no intelligent rat turns down any of these yummy treats. That’s why wild rats tend to congregate around dumpsters and trash bins nibbling on anything they can get their little paws on. Pet rats are no different. Most pet rats will eat anything their owners offer them, and since they are omnivores, consuming both meat and vegetable matter, owners tend to offer them a little bit of everything. The problem is that a little bit of everything can eventually add up to a lot of weight gain, particularly in pet rats confined to cages for many hours a day who have nothing better to do than nosh. Fat rats can develop many of the same cardiac and musculoskeletal problems that other obese animals and people can develop but are particularly prone to the formation of lipomas, which are fat deposits under the skin that can actually become as large as the rats and can interfere with walking and moving due to their size and weight. Some lipomas become ulcerated and bleed from friction with the ground and actually must be removed surgically.

Savvy rat owners can help prevent obesity by feeding a limited quantity of commercially available, nutritionally balanced rat pellets supplemented with small amounts of vegetables and fruit, and also by having rats work for some of their food. Rats are incredibly smart and love to run through mazes and solve puzzles. Food offered in the form of a reward at the end of a maze or at the top of a multilevel cage encourages rats to get exercise to obtain their meals and can help limit weight gain in predominantly sedentary rodents. Plus, most rats really enjoy the mental stimulation of having to hunt and search for food. Small rodents like rats have very high metabolisms, so getting them to burn calories through exercise is a great way to encourage weight loss. Just remember to consult with your veterinarian before starting any diet or exercise program with your rat to make sure you know how to help your pet lose weight safely.

What to Consider Before Adopting a Parrot, Rabbit, Guinea Pig, Iguana or Other Exotic Pet

When people hear about adopting pets from a shelter, they naturally think of dogs and cats. However, exotic pets of all kinds can be found at shelters, too. From parrots to rabbits, guinea pigs to iguanas, even potbellied pigs — there is a shelter for nearly every species. Exotic pet shelters and rescues can be found worldwide. A likely place to start looking for one in your area is to search the Internet or, better yet, ask your veterinarian for some suggestions on where to look. If you’re considering bringing an exotic pet — feathered, furry or scaly — into your home, it’s a great idea to consider adopting one from a shelter. Remember, though, that many animals in shelters are dropped off with very little background history. Also, not all shelters are created equal. Just as if you were adopting a dog or cat, it is critical for you to look for a well-run, clean, organized shelter in which the pets look happy and well cared for. Get as much information about the pet as possible, such as its age, previous home, dietary preferences and past illnesses. Here are a few other tips to keep in mind:

END_OF_DOCUMENT_TOKEN_TO_BE_REPLACED

5 Facts That Will Change the Way You Think About Rats

The word “rat” for many people immediately conjures up the stereotypical vision of a beady-eyed, pointy-nosed rodent that scurries around at night in the trash. But actually, domesticatedrats can make phenomenal pets and are far from the invasive vermin that people commonly think of when they think of rats.

They are fastidious groomers that actually do not like getting dirty. In general, if they get something on their fur, they immediately try to clean it off. They love to groom each other (allogroom) and to gather and organize their food into piles. So they are actually quite neat. Rarely do they need bathing. Typically, the only rats that require regular baths are older, obese, ill or arthritic rats that have difficulty grooming themselves, or unaltered males that mark their territory with urine.

2. Rats are extremely smart and empathic.

Many people don’t think of rats as being smart, but they are actually very intelligent and easy to train. Their intelligence is why rats are so often used in psychological studies to help understand human behavior. They can be taught to perform tricks, master puzzles, run through mazes and even solve simple problems. All they need is a dedicated trainer and some motivation (usually with a favorite food reward).

It’s incredible the tasks rats can perform when they are shown how. For example, rats can be taught to play fetch and to catch a ball. They can also be taught how to drop a ball through a hoop, as in basketball. Rats will also respond to their names when called. They also show empathy and compassion for their fellow rats when they are in distress — qualities that are not often attributed to animals other than humans.

Ask any rat owner, and he or she will tell you: Rats recognize their owners and respond to their sight and voice. They are very social and love to hang out with human family members on the couch or on peoples’ shoulders or in their laps. They will even try to groom their human companions as if these people were other rats in their “rat pack.” Pet rats love the warmth and contact of their caretakers and are actually very cuddly!